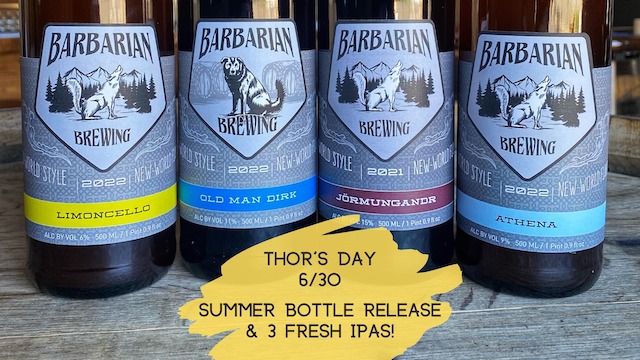 We’ve got a stellar Thor’s Day lined up on June 30 with four-barrel aged releases and three fresh IPAs!
KISMET KITCHEN will be open and serving food from 3pm-8pm.
Barbarian Club Members also get to pick up bottles of the four-barrel aged releases for their Summer Allotment.
_____________________________________
~LIMONCELLO SOUR~ Gold sour with lemons & vanilla.
Limoncello is the national drink of Italy and is the perfect digestif for a hot summer’s day. Our Limoncello sour is light, sweet and has a bright tang of lemons. We aged our spontaneously fermented golden sour on lemon peel and juice with vanilla beans from Madagascar. Salute!
6% abv
Draft & 500ml Bottles
~ATHENA~ Gold sour aged with Muscat Blanc grapes.
Athena is the goddess of wisdom and war and the favorite Goddess of the ancient Greeks. The city of Athens is her shrine and the region that is home to the origin of the Muscat grape, or Moschato. We pay tribute to Athena with our foeder fermented golden sour that we blended with a bountiful harvest of Muscat juice. Ya mas!
9% abv
Draft & 500ml Bottles
~JöRMUNGANDR~ Bourbon barrel aged Imperial Quadruple with maple syrup & star anise. Jörmungandr, the serpent son of Loki, encircles the Earth with his tail in his mouth. It has been told that when he releases his tail, Ragnarök will begin and there will be a great battle with his nemesis, the mighty Thor. Jörmungandr is defeated but only after he releases his deadly venom that fatally poisons the Thunder God.
15% abv
Limited Draft & 500ml Bottles
~OLD MAN DIRK~ Woodford Reserve Bourbon barrel aged version of our Scottish ale, the Dirk, which was named after the handsome lad on the label. Dirk passed away in 2019 at 12 years old and was one stoic, yet grumpy dog, but loved hiking and the beach.
11% abv
Draft & 500ml Bottles
~ LIL’ FENRIR ~
Hazy IPA made with Azacca, Mosaic, Citra, and El Dorado hops.
6.5% abv
Draft & 16oz Cans
~ LITTLE WOLF IPA ~
Fresh batch of draft and cans available!
+ Google Calendar+ Add to iCalendar

Art at the Greenbelt Market