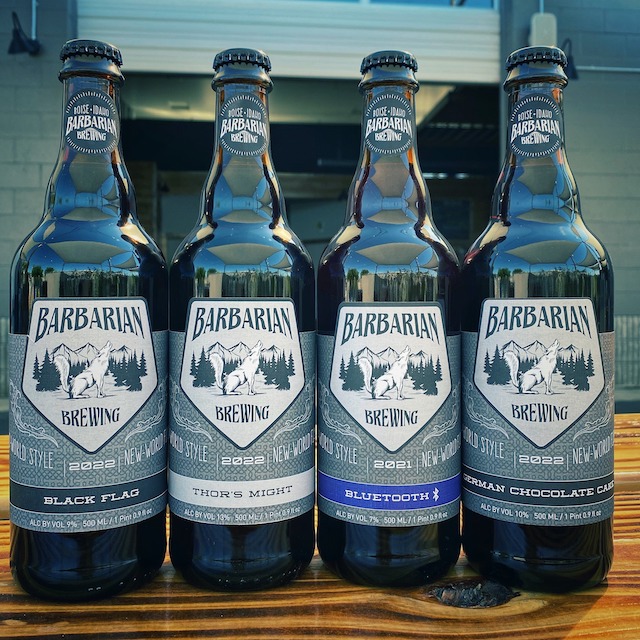 We are releasing four new barrel aged beers and Salute Your Schwarz on First Thor’s Day 10/6!
Kismet Kitchen will be open and serving food in the beer garden from 5-8pm
Barbarian Club Members get to pick up their Fall bottle allotment.
___________________________________
BARREL AGED RELEASES: All available on draft and in 500ml bottles to go.
~BLACK FLAG~
Avast ye matey! Batten down the hatches and raise the Jolly Roger, you’re in for a wild ride! Black Flag is a spontaneously fermented Oud Bruin aged in Rum barrels with blackberries.
~BLUETOOTH~
King Harald “Bluetooth” Gormsson was famous for uniting all the Danish Viking tribes into a single kingdom. He was also famous for having teeth stained blue from eating too many blueberries (if there is such a thing). In honor of King Bluetooth, a teeth staining number of blueberries were added into a blend of spontaneously fermented sours.
~THOR’S MIGHT~ Hold on to your Mjölnir! This is a mighty ale that is brewed to the strength of the God of Thunder. Thor’s Might is an American style Barleywine aged in freshly poured Bourbon barrels. Be wary, mere mortals. This ale packs a thunderous wallop! (13%!)
~GERMAN CHOCOLATE CAKE~
Imperial Stout aged in Bourbon barrels for a year. The barrels were blended with chocolate, espresso, pecans, vanilla and coconut. It’s like a slice of rich German Chocolate cake in a glass! *Contains nuts!*
~ SALUTE YOUR SCHWARZ ~
German style Schwarzbier (Black Lager) is made with dark German malts and lagered for 6 weeks. Camp Anawanna, we hold you in our hearts, and when we think about you…
5.1% abv
Draft and 16oz cans